What It's Like to Be a Graphic Designer for Burning Man?

Sharing this article about my TYPO SF talk and my experiences designing for Burning Man from Peter Lawrence of SF Weekly….

Or see the original. 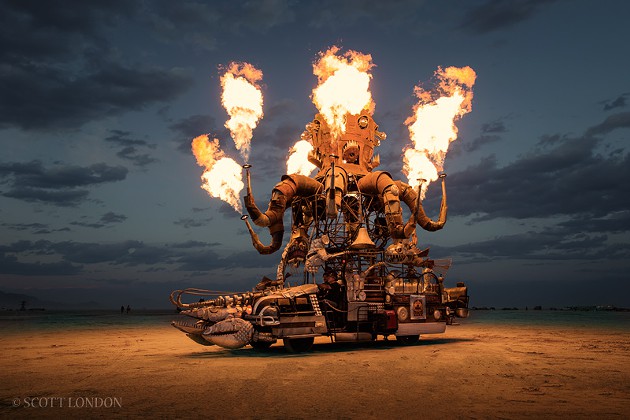 Arin Fishkin has been a graphic designer for Burning Man for the last 12 years. In a talk she gave at last week’s TYPO Conference, Fishkin described what it was like to work for her “dream client” as the event has morphed from the kind of thing where people would place a brick on their car’s gas pedal and “drive” across the hardpan while drinking beer on the roof into the juggernaut it is today. Her slideshow contained a series of beautiful photographs, exquisitely laid-out calendars, and only a single naked butt.

Having started in the industry as a temp “below the bottom rung,” Fishkin quickly worked her way up through Burning Man’s ranks, and offered a few key lessons on how she did it: Don’t be afraid to tell a client you want to work with them. Following the money won’t bring you joy; double your rates. Educating clients is part of the job description. And failure is a necessary evil (but not an reason to throw a party, as one so often hears these days.)

Her big break came in 2004-05 when she took an informational postcard that looked like typographical nightmare and transformed it into a larger, more readable item that folded. Observing that “design is problem solving, not beautification,” Fishkin considered it a design victory even though she conceded it was “barely sexy.”

Along the way, there have been some notable encounters, such as the time she spent poring over vintage Boy Scout manuals for inspiration on how best to instruct people how to stay alive and out of jail, the hours on the playa in the company of the festival’s Republican lobbyist, or when she got to hang out with “Jim Belushi and his shaman.”

Burning Man is not an easy client, being both stridently anti-commercial and leaning on themes that Fishkin called “usually oblique or abstract.” As a regular festival attendee, she took a serious approach to photography, and now heads up the annual calendar (which is the only official swag that Burning Man produces, and, like a corporate fiscal year, runs on its own rhythm from August to July.) Hi-res photography has evolved quickly, and Burning Man’s house designs have necessarily kept a close tail on it.

“The world is too savvy now to have any kind of impact without design,” Fishkin said, by way of conclusion.

Chatting with SF Weekly a few days later, Fishkin elaborated on several key points, such as the festival’s doggedly anti-commercial posture and what it was like to chill with that Republican dude. 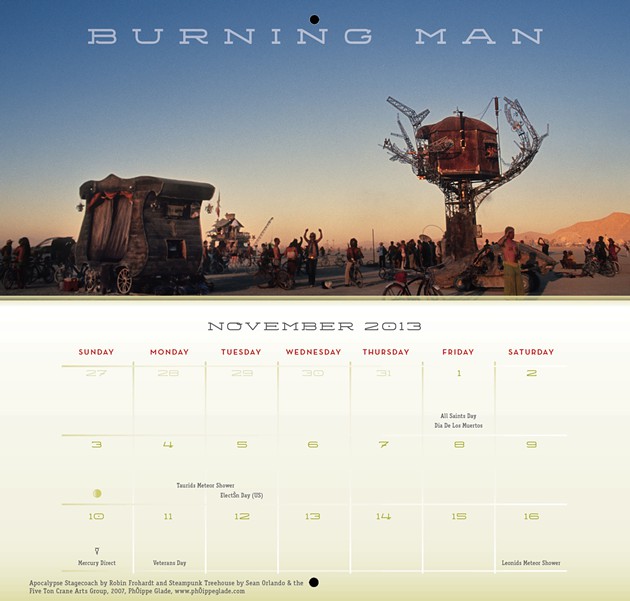 As far as Burning Man’s difficulty as a client goes, it’s really because they don’t let her phone it in, demanding round after round of edits on a given year’s calendar even though she’s produced 12 of them already.

“Some of my clients are more easily impressed. Some know that I’m hitting my marks and don’t need to see the bar raised every year, but Burning Man isn’t one of those clients. I appreciate it, but certainly there are moments of frustration when I’d like it to be done and it’s not done.”

Importantly, while it seems that the organization can come down hard on artists who might playfully appropriate the name or image, it’s really about applying the same standards across the board.

There is “a really aggressive effort not to let other people make money off the event,” Fishkin said. “MTV tried to come out there and film and they were stopped, and I heard about nail polish companies who tried to use ‘Burning Man’ or ‘Playa’ to describe their colors, and there’ve been cease-and-desists against that. They effectively protect the name and the content … a heroic job which sometimes seems like bullying against smaller artists, an all-or-none approach. To protect it they have to completely protect it.”

And how about that lobbyist? When they met, he was bragging about being friends with Nevada Senator John Ensign, then embroiled in a sex scandal, and disparaging Barack Obama’s clammy handshake.

“It was almost a cliché of an unmanly handshake,” she said, “an ‘I got to meet the president and this is what he’s like,’ implying everything about his ability to be commander-in-chief in that one gesture.”

But the guy pulled through when seemingly every town in northwest Nevada thought the Burners were a bunch of drug addicts.

“There he was, fighting for Burning Man at a time when Burning Man needed defending, and it changed things dramatically. This guy came in and let the shopkeepers know and the mayors know that [attendees’] average income was $120,000 per household. So all these business people were disparaging Burning Man because they thought it was poor hippies, and this guy said no, you just have to tap into this resource … It went from hating Burners to serving them, and seeing a dramatic financial impact.”

With respect to the world’s ever-increasing savvy, does she consider that to be an ally in design, or a hurdle?

“There was a world before Apple products were everywhere,” she said. “Poor design was in every corner of our daily lives in the US, compared to Japan where everything is perfectly designed: every icon, every poster, every gift of chocolate. Everything in the US was kind of beige or bland, or trying to grab your attention.

“All my clients understand that design has a value, and that’s a big shift from 10 or 20 years ago, it’s been a constant step into a world of design improvements, people respecting it … People understand more and more. I like the world better with that savviness and awareness. A good-looking world is better for everybody!”